Creativity is great, but sometimes you just want to blast some aliens.

In Apple Arcade’s new No Way Home, poor Cho is stuck in an escape pod in the depths of space following an explosion that killed everyone else on the Budget Star Cruises ship she was on. She needs to get back home to Earth, but she’s apparently not even in the same galaxy.

“Would you like some smooth jazz while we wait for a rescue?” asks Matey, her robotic Safety Pod Assistant.

Cho—a young mohawked woman who flunked out of pilot school—would not, thank you very much. Luckily for our hero, Budget Star Cruises at least didn’t scrimp on the budget for her pod, equipped as it is with an upgradeable laser that blasts boulders and baddies and a grappling hook that can either pull away asteroids or hold enemies in place when they’re trying to avoid her gunfire. And then there’s Matey himself, who floats alongside her and fires off both tutorial taps and automated secondary attacks. If you’ve gotta be lost in space, it could be worse.

After an hour with Cho, I like to think of No Way Out as a robust take on Asteroids. Cho’s little craft can fire in a circular direction around her, either to hit big space rocks or to riddle the hulls of pirate ships that pursue her. Beyond that, she can collect materials to craft more than 50 types of guns to use on roughly 60 different enemies, and she can use warp gates to jump among the various procedurally generated asteroid-strewn passages. Sometimes she’ll even have to fight off waves of enemies in order to grab artifacts from forgotten alien civilizations, all while being careful not to overheat her gun or deplete her ship’s shields.

In her off moments, she pulls into space bars to pick up missions from shady traders and hobnob with retired rift horrors who’d now rather pour drinks than lay waste to space armadas. There’s a lot to do.

As you might have guessed, SMG Studio’s game is silly in a manner that recalls A Hitchhiker’s Guide to the Galaxy, and I’m glad to see it. Matey delivers the bulk of the one-liners, but you’re just as likely to hear them from the tentacled maws of the aliens Cho meets in interplanetary pubs, such as one who chides her for calling him an alien even though she’s the stranger in these parts. No Way Home as a whole looks like a webcomic comes to life, with a hand-drawn aesthetic that reveals itself in everything from chat windows to menus. 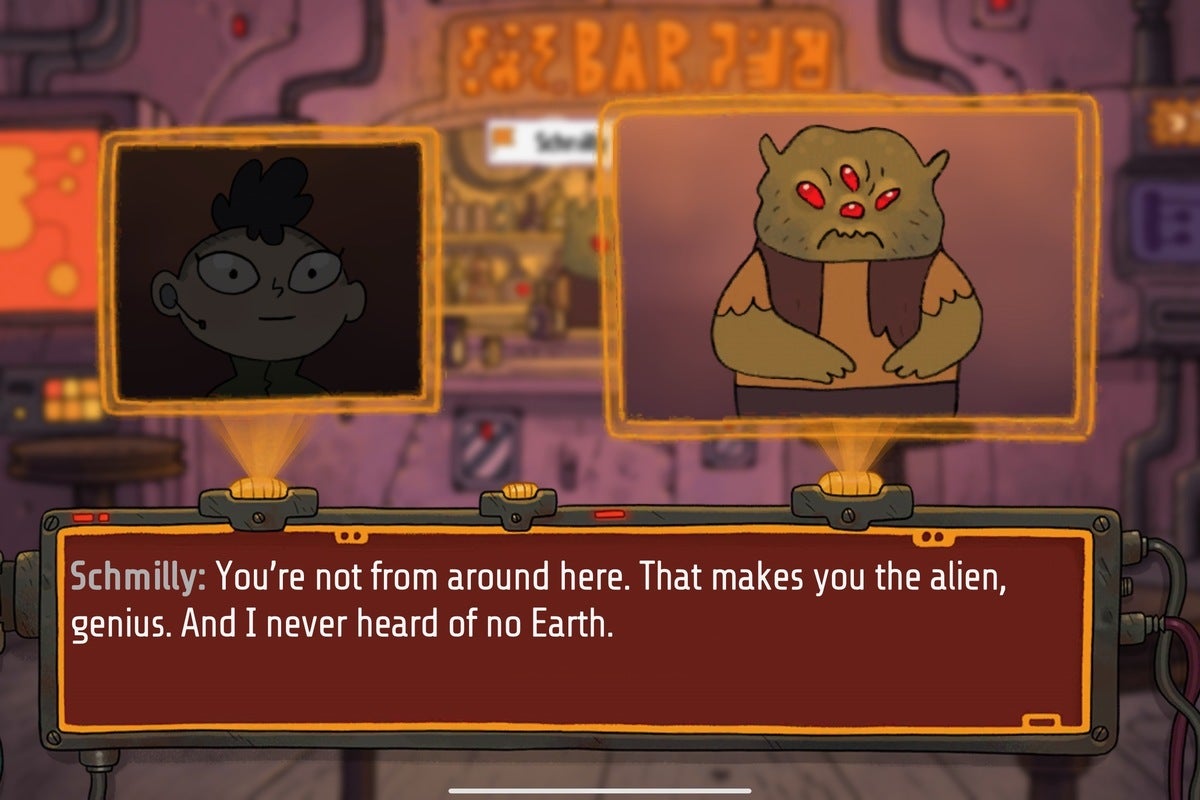 The aliens Cho meets are all pretty open-minded, considering how she’s making the first contact with a lot of them.

The timing couldn’t be better. In the months since Apple dropped its first 53 games, creative and occasionally moody games like Manifold Garden and Inmost have made up the bulk of the new releases. That’s the kind stuff I called “art house games” last June, and I still believe they’re essential for helping Apple distinguish itself from other gaming platforms. But even those of us who appreciate art and creativity still sometimes just want to sit back and lose ourselves in something that lets us blast pirates and space rocks for hours on end. Something, in other words, that feels a lot like an actual arcade game. Like Apple Arcade’s Bleak Sword or What the Golf?, No Way Home does a lot to scratch that itch.

[ Further reading: Everything you need to know about iOS 13 ]

If there’s an itch No Way Home isn’t scratching an hour in, though, it’s the one that has me craving more interesting guns. When Cho sidles up the crafting stations in the cantinas, I’m basically only finding better versions of the gun I already have. I’d like to see guns that scattershot projectiles or fire lasers, and for that matter, I’d like to see Cho slap around baddies with something more interesting than the grappling hook (useful though it is).

These kinds of gadgets likely await in the great Out There, and I suspect I’ll have fun finding them while steering Cho back to Earth. No Way Home, after all, is as much about exploration as blowing things up, and I’ve already been impressed by the number of times I’ve floated past intergalactic gates—part of an “intergalactic conga line,” as Matey says—that has nothing to do with the mission I’m on. What loot awaits me there? Will the enemies be too tough for me? I’m excited to finish writing this piece so I can answer that question, and I haven’t felt that way about an Apple Arcade game for a while.

Former Intel VP as the new head of inclusi...

Apple may have to ditch lightning cables i...

Your iPhone can now act as a physical Goog...

Apple may be planning to launch the PRODUC...